Backdoor Shootout 2020 | King of the Hammers

Since there was no King of the Hammers backdoor shootout 2020 happening this year we ventured over to the next best thing the Thursday night backdoor party. This is where all the trail rigs take turns hitting backdoor in front of a massive crowd of hecklers. Backdoor is a massive rock waterfall located at Johnson Valley OHV in Landers, California. It is one of the most well know hammers trails and from watching this video you will see why.

Welcome to the Party 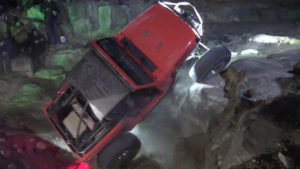 iconic climb before the crowd gets out of hand. Once that happens we dip out back to Hammertown. It took a while for the first vehicle to break through the massive crowd. Once they did it was one wild vehicle aftern another. One of the best was a tube chassis Jeep JL on 42s. It attempted to one shot the climb thanks to it’s rowdy V8 engine. The driver almost rolled in the process before yanking it into reverse and gouging on the gas pedal.

The wildest rig that we saw all night was the single seater buggy that looked to be on a massive set of SHERP tires. These high flotation tires are not

made to rock crawl but he made short work of this difficult climb. The driver even stopped half way up to enjoy a beverage before proceeding to conquer the rest. This little stunt made the crowd cheer him on. It was a neat little moment. The trick of conquering this climb is to get the crowd on your side. That way they aren’t heckling you.

The crowd started getting too close to the vehicles so we decided shortly after that it was time for us to go. This party lasts way on into the night before race day. We were out of there and back to the camper by 11pm and glad about it. It is awesome to catch this natural occurrence that doesn’t get much promotion online. This is more of a behind the scenes thing that most new visitors to King of the Hammers know nothing about. We hoped you enjoyed the KOH backdoor shootout 2020 action and let us know which rig was your favorite in the comments.