On Extreme UTV Episode 76 we are taking you to Dirty Turtle Offroad Park in Bedford Kentucky for the Pro Rock Racing season opener. They have a difficult UTV hill climb racing course that has only gotten wilder due to a recent snow. Pro Rock Racing and Pro UTV Racing are really pushing the envelope this year with course difficulty. We like it when not all of the drivers can make the RZR hill climb. It makes for a better UTV hill climb competition experience for the crowd and the folks watching Busted Knuckle Films at home. The best part is how close time wise the big bouncers and UTVs are on the same exact course. We have even seen that RZR Buggy guys beat the fastest Big Bouncer times on certain hill. Now that is impressive. 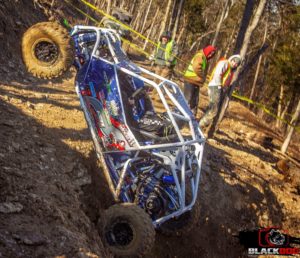 course. This included one day run and one night run on the hill climb. The amount of time that these drivers made up on their second pass was nothing short of impressive. That is not even taking into account that they were now running faster times at night. In the end the winner was some guy we had never heard of before. We expect to be hearing much more from Wade Goode and his hot pink rzr buggy at races in the very near future. Well that is if we get to race anytime again in the near future. This corona virus stuff has gotten all of the races for the foreseeable future postponed. Be sure to let us know who your favorite UTV driver is in the comments and thanks for tuning in! Also be sure to check out the Busted Knuckle Films Channel on Amazon Prime.