Wayno picked up this Jeep while he was a mechanic in the Marine Corps.. Most of his time was spent in Kaneohe Bay, Hawaii. When he got to Hawaii a sergeant of his owned it. He eventually got out of the Marines and sold it to another guy in his shop, who eventually got out and sold the Jeep to Wayno’s roommate. When it came time for both of them to get out of the Corps the Jeep was sold to Wayne and he shipped it back to the motherland.. He has  now owned this Jeep for seven years.  In that time it has changed a lot.

give it a new coat of primer. After some light wheeling Wayne decided the old CJ7 needed some better running gear. The stock AMC 20 and Dana 30 were pitched in favor of a pair of Corporate 10 bolts out of a full size blazer. The new beefier axles were geared to 4.88 and tossed under the jeep. The driveshafts were modified and the front spring perches were outboarded on the frame to match the width of the spring perches on the new axles. CJ7s come from the factory with their springs mounted under the axle. So for some cheap and easy lift wayne just mounted them on top of the axle. Now that is how to lift a Jeep on the cheap. Lastly a set of 35inch Mickey Thompson Baja Claws were mounted into place.

This setup lasted a few years but as most of us know the more you push a rockcrawler the more you find its weak links. The old carbureted 4.2 Inline 6 cylinder and manual trans were making wheeling difficult. Wayne found a donor 2wd Cherokee and swapped the Fuel Injected 4.0 and AW4 automatic transmission into the CJ7. He even set the cherokee guage cluster into the dash of the CJ. The tilt steering column was also swapped in from the cherokee. The Jeep was starting to look more like a TJ than a CJ.

Now that the running gear was taken care of it was time to work on the wheelbase of this thing. The rear springs where taken out of the cherokee and flipped around and used on the rear of the CJ to add a few inches to the wheelbase of the Jeep. This can be done because the center pin on cherokee leafsprings are offset to one end. A new rear bumper and shackle mounts were fabbed to accommodate the Jeep’s new found wheelbase. 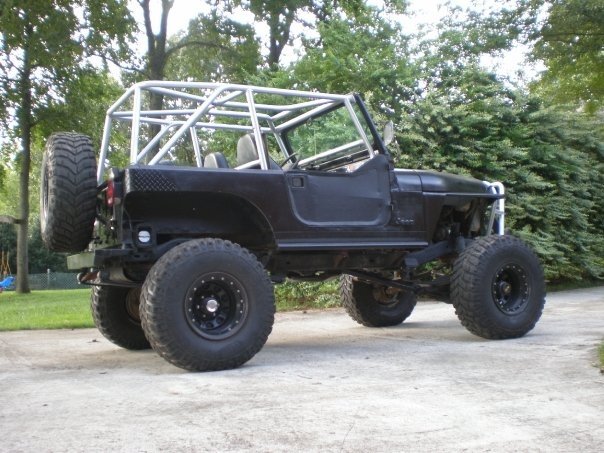 Lastly it was time for some paint and some protection for the Jeep. Wayne built a 6 point Rollcage out of 1.75 .120 wall DOM tubing. He also added a front stinger and tube fenders to finish out the front of the Jeep. The CJ7 dubbed “TJ7” due to its components is beat on alot these days without a glitch. You can see this rig and more in action in our latest Offroad DVD entitled Southern Shenanigans or out on the trail at parks all across Alabama and Tennessee.