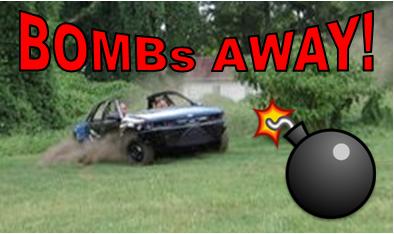 Have you ever wanted to drive a race car but just didn’t think you had the cash? Well the Bomber Race during the Rock Rallye at Morris Mountain ORV might just be the answer. The race consists of junk cars racing around a specially built track for 4 hours all the while slamming into each other.

We decided to sponsor and help Crazy Steve of Integrity Automotive build a race car. The rules are simple; you take a car, rip out all of the glass, cage it, paint it & go race! The entrants for the 2010 race include everything from a F250 conversion van to a Honda Civic hatchback. 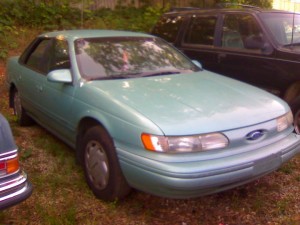 After a lot of searching we decided on a 1994 Ford Taurus. Actually it found us as its owner was giving it away for FREE. We got to work quickly cutting the roof off (this made it easier to build the cage) & gutting the car. The car needed some TLC including a new head gasket and some other miscellaneous wrenching. It didn’t take long for us to get it running enough to take it out to the dirt lot next door for some testing. The car was overheating badly, hey we can always just run the heater on full blast during the race right?

Next was the paint scheme. The rules state that we have to have a Nascar inspired paint scheme. We went to work with some Ford Blue and some cheap black spray paint. After rattle-canning the car half to death we slapped on a few stickers to make it look racey. We hand painted the Busted Knuckle Films logo on to the hood with some white enamel.

Then came the mandatory Roll-cage.  A few pieces of 1-3/4″ .120 wall HREW tubing was bent up  with a ProTools bender. We started with the main hoop just behind the driver otherwise known as the B-pillar. We welded it to the floor with some square plates. Then we connected two supports from it back to the trunk area. A few bars going down beside the driver and passengers feet and we had a regulation 6 point cage. We had a nice surprise as the car caught on fire while welding the plates to the floor. Turns out the gas line was running just below it. No worries though we quickly dowsed it out with a fire extinguisher. We also cut out the passenger airbag and added a grab bar for the person that is brave enough to ride with Steve.

Custom bumpers were fabbed up to keep the car protected during the 4hour smash em up derby endurance race. We hope the car can stay together for the entire race. It will be tough with Steveo behind the wheel. He already broke both front CV shafts test driving the Bomber Taurus in the field next to the shop. We will see what happens when he hits the 50′ table top. Catch all the action in our next DVD entitled “RockRods”. If you want to race check out the links in this post and get started!