We have covered a ton of different kinds of off road racing in our years behind the camera. None of those seem quite as fun as Redneck Tough Truck Racing. We caught this race at Dennis Anderon’s Muddy Motorsports Park near the coast in North Carolina.The sport is involves knocking the glass out of a vehicle and racing it on a track with jumps. We see everything from Jeeps to trucks and everything in between. The trucks run 2 at a time down a course that is down and back. You are running against the clock. The truck next truck with the fastest time advances onto the next round. The loser packs it up and puts what is left of their vehicle back on the trailer.

We start off the race with two Jeep Grand Cherokees that are fairy modified within the rules. The track official raises both arms and drops them to start the race. These driver give their vehicles an absolute beatdown. They aired them out over the jumps numerous times. I couldn’t believe they stayed together as both Jeeps crossed the finish line. Next up we had a newer Ford Explorer vs a Jeep Cherokee. The Jeep was in the lead off the line but quickly fell behind. The Explorer took the win grabbing huge air off of the final jump. Next up we had the classic Ford vs. Chevy truck battle. They left the line together but only the Ford crossed the finish line.

There was some great action at this race. One of the best shows was a guy in a tiny Suzuki Samurai who gave it an absolute beating. The litte samurai would get big air and bounce all over the place when it landed. Some of these guys even had passengers! Would you ride along with one of these crazies? For more Off Road racing action head over to the Busted Knuckle Video Youtube Channel. For even more Tough Truck Action check out the video below. 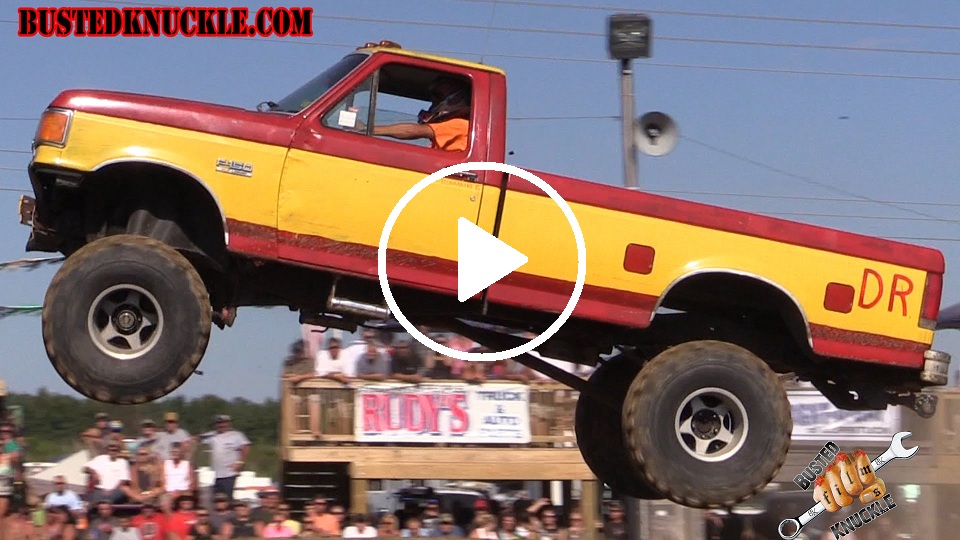