Fastest Hill and Hole Trucks in the World

The Lee County Mud Motorsports Complex features some of the fastest Hill and Hole Md Racing Trucks in the World. These trucks have well over 1000 Horsepower and run through 250 feet of nasty mud and jumps in as little as 4 seconds from a dead stop. These Hot Rods of the Mud World flat out Get. Darryl Jones is the owner of the park and he also is the driver of the Scooby Doo truck which features a ground pounding 572 cubic inch blower motor. He is known to put down some wicked fast passes in his truck as well as make sure the event runs smoothly.

Fastest of the Fast

This time the event is called the Fastest of the Fast and was scheduled for the first weekend in October before a hurricanw dumped torrential amounts of water on the track leaving them no choice but to push back the event. But now the event was on and despite even more rain the event must go on. Drivers from all over the USA were challenged to come to North Carolina to see if they can make some Sub 4 second passes. The World Record for a 250 foot Hill and Hole track is 3.643 seconds and the track record at LCMMC is 3.649 second.

The 250 foot pit has 3 jumps in it that keeps the drivers from getting any faster but can get them out of control fast. The driver of this classic C10 called “Back in Black” Kody LaPoint found that out the hard way as he gets crooked and sprays the crowd with mud. You cannot be afraid of getting muddy if you want to watch this sport. Jason Schmidt made some impressive passes in his 632 powered Jeep. We were excited to see a diesel rig pull to the starting line but unfortunately some Nitrous problems left him with catastrophic failure of black and white smoke at the starting line.  After all was said and done Chad Sexton’s narrowed Chevy 1500 Lacking Sanity and its Nitrous injected 632 Big Block motor finished on top with a 4.038 second run. His teammate Denny Kerley took second with a 4.103 second run in his 572 powered D50. A Rain soaked track kept trucks from making it into the 3 second range but we will be back in March to see if they break the record. These are the world’s fastest hill and hole trucks.

Mud Outlaws are Wicked Fast in the flat pits too! 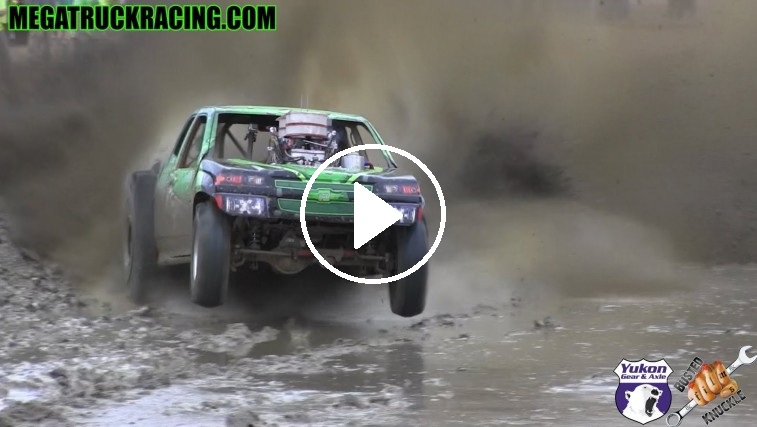