On this episode of Extreme UTV we are doing something we have never done before. That’s right we are taking the Busted Knuckle Mega RZR Mud Bogging! We traded out our beadlocks and sticky tires for some 20″ Coyote American Force UTV Wheels and 35″ EFX Motohavok Tires. The entire SuperATV 4″ portal equipped Busted Knuckle Films RZR is coated in WD40. This little truck should make cleanup

easier. Now we are ready to see what this whole mud riding thing is all about.

We couldn’t go RZR mud riding alone so we talked David Uptain from RZR Life into tagging along in his Portaled RZR on 37s. All it took was the 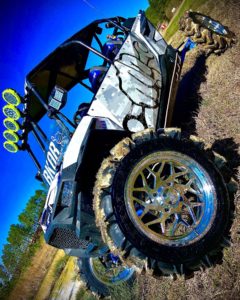 promise of a spicy chicken sandwich. Me and David set out to my favorite testing spot at Stony Lonesome OHV park. It is just down the road from the Busted Knuckle Off Road shop. Our mission was to see what this UTV mud riding thing was all about. We started with some light mud and mostly water out front and then decided to head into the woods to see what we could find. Well it didn’t take long before we found the limits of both machines. Even though we both got stuck a few

All in all this mud riding thing is pretty awesome. So much so that we might just have to do more of this in the future. We plan to throw a snorkel kit on both machines and really see what they can do! I’d like to run at least a 37″ tall tire going forward as I think the mud is a lot more forgiving on parts compared to rock crawling on 35″ sticky tires. Stay tuned for more RZR Mud Bogging action as we get the Busted Knuckle Mega RZR ready for more adventure in 2020! We hope you enjoyed this Extreme UTV Mudding episode, let us know if you did in the comments below.