Tug of War Goes Wrong when a Truck Bends its Frame in Half!

Weight is a huge factor when it comes to a Tug of War competition. Especially during the annual Truck Tugs event at Big Lick Park in Oakboro, North Carolina. Miles the owner of this Cummins Diesel Powered Dodge Ram Truck knows this all too well so he stacked tons of concrete barricades into the bed of his truck. This is done quite often in the tug o war world and is no problem for heavy duty trucks like this one but where he went wrong was how he rigged the tug rope. It was ran over the barricades and down to the frame. This created added leverage and stress on the frame. The announcer gives the two trucks the go ahead and it doesn’t take long to figure out that Miles has made a Huge Mistake. The added force is too much for the stock 3/4 ton frame as it buckles in half. Miles isn’t phased as he hops out the window of his truck to inspect the carnage. He then proceeds to bend it back with the help of a Trackhoe and Skid steer. Not only does he fix the truck but he goes on to win the entire event and $1000 Cash. This goes down as the wildest carnage and the best comeback in Tug of War Trucks History! It was a rough night for the poor old dodge. After the Tug of War Competition was over a mud racing competitor rolled over into the dodge as it was parked on the tug of war pad.

Check out another Wild Tug of War Trucks Video where one catches on Fire!

This Lifted Chevy gets Pushed Past the Breaking Point! 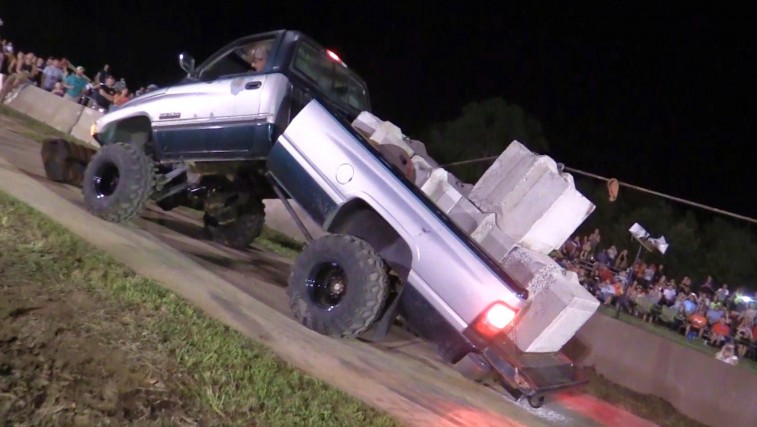