Opie Labarbera and his Opielicious Chevy Mega Truck faces off with this Mega Yellow Ford ranger for this Tug of War Gone Wrong. Tug of wars can be tough on parts, especially transmissions when you have 1400 horsepower on tap thanks to blown alcohol injected big blocks. Good thing these trucks are built with some of the best parts money can buy. That being said nothing is bulletproof and the parts on these trucks are ticking time bombs after taking tons of abuse. You never know when or what will let go. The Yellow Ford wins the first round. Opielicious comes back and takes the second round making it one to one. This is it, the final round. They start off and it looks like Opie will take an easy win but just when you think he has it in the bag the Ford Ranger takes off the other direction with both trucks smoking the tires. They fight back and forth in a dead lock each gaining inches before the other takes it back. Then out of no where the tires on the ranger stop moving as the engine continues to rev. Something has failed in the transmission. The safety crew tries to stop the event but it is too late as the Ford Ranger bursts into flames. The driver bails out of the truck just in time as the track officials head in to battle the towering inferno. It takes 4 extinguishers to put out the fire but no one was hurt, well except the truck. All is fair in Tug of War Gone Wrong.

For more Tug of War Trucks Videos head over to the Busted Knuckle Video channel on Youtube.

Watch This truck get Torn in Half during a Tug of War Competition!

This Tug of War Contest Ends in Carnage for this Show Finish Chevy. 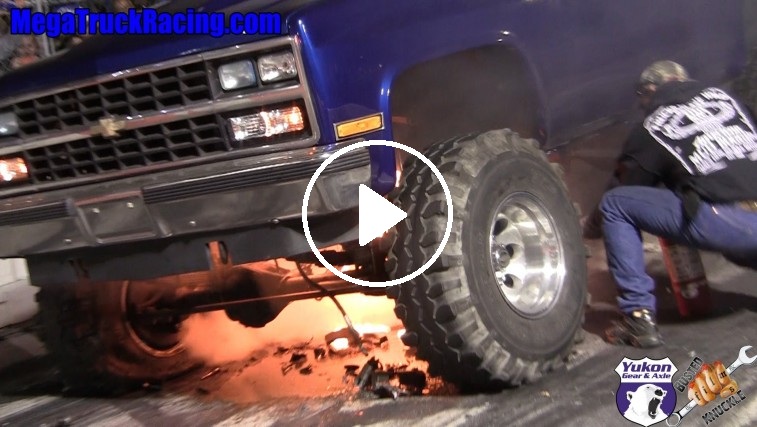