Jordan Tanner was a well known driver in the sport of rock bouncing before retiring after some serious crashes. He drove one of my favorite rock bouncers of all time Screaming 2. The buggy started out as the Coleworx Moonrover buggy before Tim Cameron sold it to Jordan and he changed up the colors and renamed it. The buggy featured a mean small block 434 engine pumping out close to 700 horsepower. Its 43 inch tall tires and beadlocks made for great traction and the 14bolt front and rear axles were almost bullet proof. He conquered some epic hills in the beast but none quite as bad as Showtime.

Showtime Hill is one of the most famous Bounty Hills in the sport of rock bouncing. It is located at Hot Springs Off Road Park in Arkansas. The hill got it’s name when Tim Cameron climbed it first. He named it after the buggy he was driving at the time. That was years ago and still to this day only a handful of drivers have made it out the top of this famous hill.

This was the second bounty put on the infamous hill. It happened after the Southern Rock Racing Series Finals. Jordan Tanner was still together after rock racing an decided to give it a shot. He strapped in and got ready for lift off. He pulled up to the hill and felt it out a few times before giving it a full on attempt. It jumped clear up to the middle of the hill. Backing down Jordan gave it another shot and launched into the air. Screaming 2 always was a great flying buggy. He lost traction on the final ledge and backed down to hit it again. The next run he landed in the gas sending the buggy into a wheel stand. He saved it but that ended his run.

Jordan Tanner wasn’t able to find the traction to climb it that day. But it won’t be the last attempt on this famous hill climb. For more Showtime Hill Videos check out the Busted Knuckle Video Youtube Channel. Check out the video below of the Crash that ended his Rock Bouncing Career and destroyed Screaming 2. 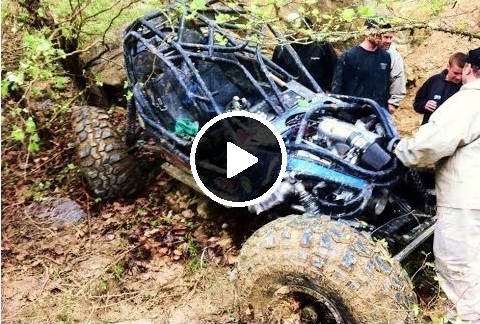