Project OVERCHARGED Dodge Charger! That’s what this BEAST of a Diesel Rat Rod creation from the guys at WelderUp in Las Vegas Nevada is being called. We caught up with Steve Darnell, the owner of Welder Up and star of the popular TV show Vegas Rat Rods, in the desert at King of the Hammers 2017. Here he gave us the inside scoop on this one-of-a-kind 1968 Dodge Charger that was built in just 6 weeks. Steve also gave us the tour of his unique Tow Rig called Swamp Ass.

In a shed somewhere in Arizona is where this car was rescued. Too far gone to do much with, the crew decided it needed to be a rat rod. That’s right so all of you purists can cool it already. He didn’t destroy the car, he brought it back to life. The car features a laundry list of awesomeness including a 5.9L Cummins diesel, twin chain-driven 671 superchargers, twin turbos, NV4500 transmission, all in a totally custom 4×4 1 ton chassis. The Wickedly Overcharged and Boosted to the Max engine has Nitrous on hand just in case you ever feel like there isn’t enough horsepower. We would like to see the boost numbers of a full throttle pass in this build. Project Overcharged is definitely the baddest diesel Charger out there and probably the only one. 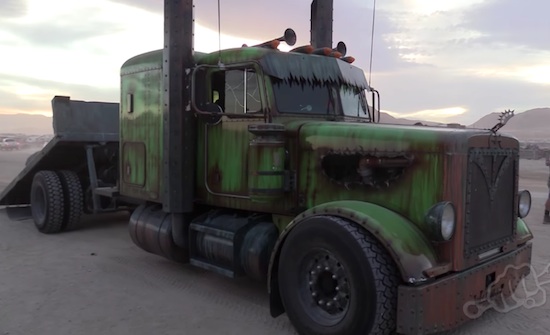 The best part about this build is Steve hauled it to the desert with his Swamp Ass Rat Rod Tow Rig. Definitely one of the baddest tow rigs we have seen in the desert. A Peterbilt Tow Truck powered by CAT and capped off with custom paint and flat bed. The welder on the back has a Turbo on it for when you want to weld really fast!  What do you think of this diesel dodge charger and rat rod tow truck? Let us know what you think in the comments below. If you enjoyed this video head over to the Busted Knuckle Store and grab you some Apparel.