There we were just a few weeks before me and the crew had to head out west for the 2014 Rock Bouncer vs Ultra4 Backdoor Shootout at the King of the Hammers event in Johnson Valley, California. There had been a ton of East vs West trash talk happening online. I had been signed up. to race for months but Nick Sosebee of Sosebee Performance and Offroad still hadn’t finished the Busted Knuckle Buggy. So he decided to loan me an old worn out single seater buggy someone had traded in on a RZR. I bolted my Goforth Stickies and Beadlocks onto it, loaded it on the trailer, and headed out west the Friday before the event. The drive is a brutal 36hrs straight of stopping only for fuel and to swap drivers. We made it to the Johnson Valley Lakebed on Sunday and immediately unloaded the Rental Buggy for some testing. We hit the Chocolate Thunder Trail for a warm up and then went straight over to Backdoor for some practice. I pulled up onto the waterfall and let the peppy little propane powered 350 loose as the 43″ Competition Compound Tires clawed their way out the top. It made it up no problem. I was relieved and couldn’t wait for the race. We drove back to camp to nut and bolt check the rig for the race that was scheduled for the next Night.

It was freezing cold on Monday evening as the competitors lined up to take their run at Backdoor to see who would be the fastest. I watched quite a few vehicles run before. The weather had completely changed the game. The rocks were ice cold and many rigs were having trouble making the waterfall climb. It seemed most of the time was being made up through the bottom section of the trail. I strapped into the Rental Buggy and prepared to hammer down. As I pulled up the the start line my game plan was running through my head of how I was going to one shot the waterfall and take the left line out the top thanks to my narrowed axles. The Race Official Shouted “GO” and I was off. I beat my way through the bottom section on par with some of the fastest cars of the night. I pulled up onto the ledge and in one fluid motioned stabbed the throttle and prepared to climb the hill when BOOM. The Rear Driveshaft let loose. I was beyond mad. The crowd was heckling me so I backed off the hill and proceeded to drive back out as a the safety crew handed me the rest of my driveshaft. Then suddenly the Buggy started shifting funny as the rear axle drove out from under it. Turns out the Driveshaft did not fail on its own. Instead the chassis had broken where the link bars mounted. I climbed out to assess the damage when Dave Cole (the race promoter) told me they were running out of time and that I had to attempt to drive off the course. So I strapped back in and put the buggy in gear and started driving off the course. I made it about 20ft before the rear axle completely came loose from the buggy. I never let out and continued to drive off of the course dragging frame as the crowd went absolutely Insane. I ended up winning the Best in Show award and $2500. Not bad for my first ever race in a rock bouncer.

We Made a Busted Knuckle Drive It Like a Rental Tee to commemorate this occasion. Get Yours at The Busted Knuckle Store. We have Youth Sizes and Adult. 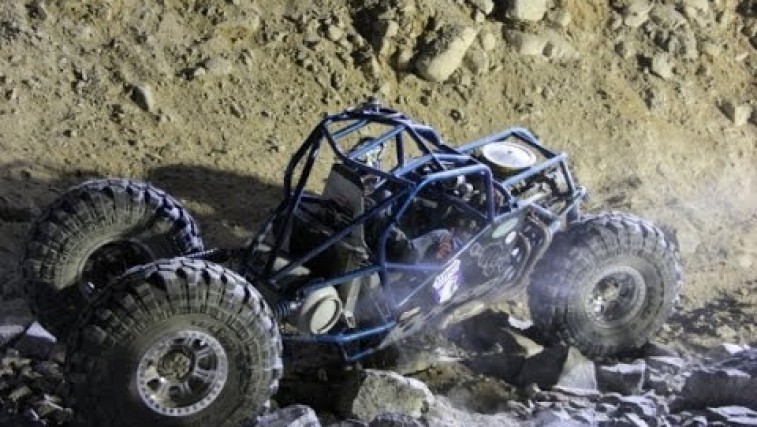